Іn a new report launched ahead of World AIDS Day, UNAIDS issued a stark warning today that if leaders fail to tackle inequalities the world could face 7.7 million. 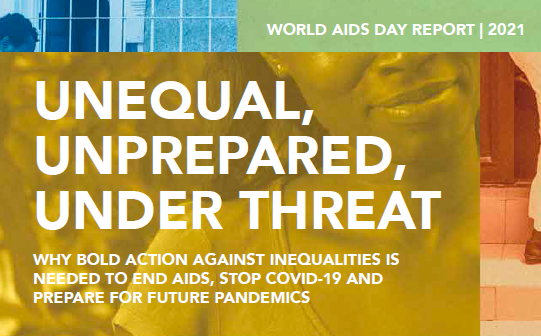 Unequal, unprepared, under threat: why bold action against inequalities is needed to end AIDS, stop COVID-19 and prepare for future pandemics. UNAIDS, 2021 (EN)

COVID-19 is undercutting the AIDS response in many places. The pace of HIV testing declined almost uniformly. HIV prevention services have been impacted—in 2020, harm reduction services for people who use drugs were disrupted in 65% of 130 countries surveyed.

This year marks 40 years since the first cases of AIDS were reported. Since that time сountries with laws and policies aligned to evidence, strong community engagement and participation and robust and inclusive health systems have had the best outcomes, whereas the regions with the largest resource gaps and countries with punitive laws and that have not taken a rights-based approach to health have fared the worst.

This new report from UNAIDS examines five critical elements of the plan agreed by Member States at the United Nations General Assembly High-Level Meeting on AIDS that must be urgently implemented to halt the AIDS pandemic and which are critical but under-funded and under-prioritized for pandemic prevention, preparedness and response. These include: