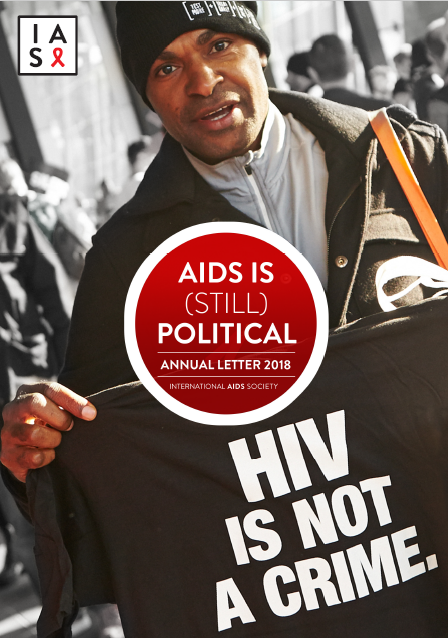 "Despite global scientific advancements and increased sharing of “best practices”, there are clearly two entirely different narratives of HIV unfolding across the world. What is at the core of this divergence, and why does it persist? One reason: Politics.

...This year marks 30 years since the creation of the International AIDS Society (IAS), an important moment of reflection for our organization. We were founded in 1988 by a group of scientist-activists desperate to share information to stop the pandemic spreading around them. When the IAS was first created, there was no treatment for HIV and no prevention of mother-to-child transmission. There was pervasive stigma and discrimination, limited understanding of HIV transmission and disease progression, a lack of awareness of the degree to which HIV was predominantly spreading in sub-Saharan Africa, and by and large only condoms for prevention. To overcome massive challenges, those scientist-activists had to address the politics that stood in the way of achieving an effective response to the epidemic.

Since that time, astonishing scientific advances helped transform the fight against HIV, shifting the discourse on HIV from an urgent, activism-led discussion to a more technocratic, biomedical one – obscuring the political dimensions along the way. But in this moment of truth – when talk of “ending AIDS” is proving increasingly disconnected from reality for much of the world – we must face some uncomfortable questions."

IAS 2018 Annual Letter published on 26 March 2018 outlines some of IAS priorities for the year ahead.

22nd International AIDS Conference "AIDS 2018" will be held on 23-27 July in Amsterdam, the Netherlands.